The first week of September someone reported the robbery of a Banksy stencil near the Modern art Museum, Georges Pompidou in Paris, we know this is not the first time that street art is taken away from the streets and neither it’s going to be the last so… Before they all get stolen or covered by new pieces of art, we prepared a short list of spots where some known and less known street artists shared their creative skills with the world. 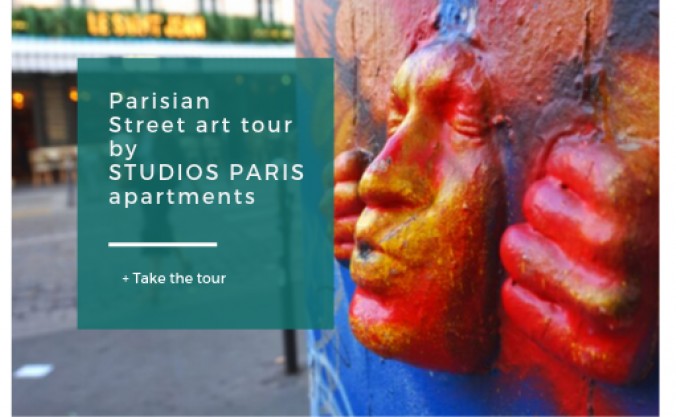 STUDIOS PARIS apartments agency is located in a famous street art spot in Montmartre and it is hard for us to think about missing some of the ephemeral (or not so ephemeral) works of art around us and also any of those that we admire when taking you to a visit to one of our apartments in Paris best locations. We recommend you start from the top of the hill of Montmartre to avoid going up the stairs when you are most tired, but it’s up to you.

From the top of the hill where Sacre-Coeur basilica watches the French capital, get off at Lamarck – Caulaincourt metro station, go up the stairs and take left on rue Saint-Vincent until you get to our first recommended spot where you’ll first notice the vineyards of Montmartre, your eyes must be wide open to find some Space invader tiles and see what other artists painted or glued over the walls of the tiny “square” park up there. Keep on going up to rue des Saules and take right on Norvins, until you get to rue Girardon, which will lead you to rue d’Orchamp where you’ll find some famous Gregos’ faces glued on the wall of this alley, you may find some works from MissTic while you stroll by Montmartre’s streets.

Go through the alley and take left where flamingoes are, then take our beloved colorful rue Androuet and stop by to say hi  J or just visit the famous store in front of us that was on Amelie Poulain’s film. Then take the stairs that will get you down to another hidden alley called Passage des Abbesses where you’ll meet familiar faces (yes Gregos is there too) but also other artists, continuous exhibitions opening each week, street artist’s love this hidden place to expose. If you are already tired, you can take metro Abbesses to get to someplace where you can see old school graffities over a long wall on rue Ordener, if you are a real adventurer and you like sport (especially soccer), keep on going and go over the bridges that cross the railways, make it left after you pass the second bridge and you will find one of the longest street art covered walls in Paris, that features some realistic graffiti portraits of the football players of PSG. If you are not that big soccer fan, then just go back to the metro station but this time take line 4 to Barbés, then take line 2 and get off at Stalingrad, take Avenue de Flandre and when you get to the 41 then you’ll get some Banksy. Have lunch over there somewhere near the canal and get some energy to keep on with your artistic journey while you discover some more pieces of art while you walk to metro line 2 at Jaurès station, go to Belleville and again…go up the hill

When you reach rue Piat, continue until you find a beautiful view of Paris decorated with some Parisian classics, SETH with some characteristic personages on the parks’ columns and Mosko must not be far with some animals’ stencils that ran free all over the 20th district. We hope you enjoy this first street art tour we prepared for you, keep on receiving some tour ideas like this by liking our Facebook page, subscribing to our newsletter and following our Blog on studiosparis.fr.